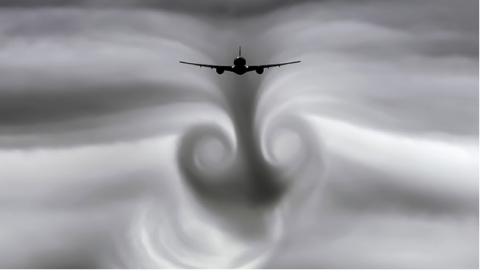 Physics professor Brad Marston is part of an international project supported by a $4 million grant from the Simons Foundation to study turbulence, one of the great unsolved problems of classical physics.

A Brown University physicist will be part of an international team of researchers taking a new look at an old problem in physics: turbulence.

Despite the fact that turbulent fluid flows are nearly everywhere, from jet streams in the atmosphere to the currents in the ocean to the wind flowing over an airplane wing, scientists still don’t have a good general theory of turbulence, says Brad Marston, professor of physics at Brown.

“We have some approximate ways of describing it, some empirical rules of thumb,” Marston said. “But if Boeing wants to model the airflow over a wing, the world’s largest supercomputer can’t do that. So there’s a push toward coming up with new ways of looking at the problem.”

Marston is part of a group of physicists and mathematicians looking to use statistical physics — which is used to explain the collective behavior of systems with lots of individual parts — to develop a new theory of turbulence. The team is supported by a $4 million grant from the Simons Foundation, a nonprofit organization that supports research in mathematics and basic science.

In particular, Marston is working with a group that’s trying to see if statistical theories of phase transitions might be applicable to turbulent flows. To do that, the team will study a simple system in which turbulence arises: a long, cylindrical pipe with water flowing through it. The simplicity of the system will enable the researchers to carefully analyze it using both experiments and computer modeling. And it’s a good testing ground for the phase-transition idea, Marston says.

“When you push water through this pipe, it starts off as a nice, regular flow,” Marston says. “But as it picks up speed, there start to be little puffs of turbulence that move along with the regular flow. As the speed picks up more, eventually the whole thing becomes turbulent. What we’re exploring is the idea that there’s a critical point where this flow becomes turbulent, and whether we can understand that transition by borrowing from theories of phase transitions.”

If those phase transitions do apply, Marston says, it might be possible to simplify the equations used to describe the statistics of turbulence, which are notoriously difficult to solve.

“That might make modeling more efficient or allow us to reach problems that we couldn’t before,” Marston said. “It might also lead back to a simpler theory of turbulence or clarify how to develop better theories.”

Marston and colleagues at Brown will handle the computer modeling part of the project with the help of Brown’s Center for Computation and Visualization and develop statistical theories based upon modeling and experiments.

“If we’re successful, we may have simpler theory of turbulence based on phase transitions, or maybe we can show that that picture is too simplistic,” Marston said. “That would be progress too.”